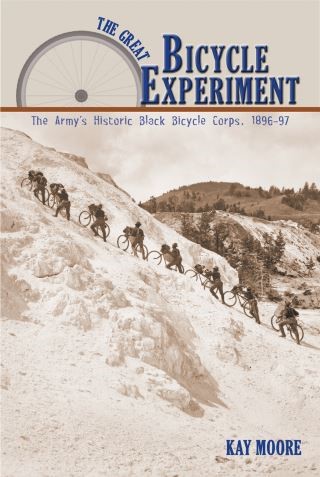 In 1896 Lt. James Moss, second lieutenant at Fort Missoula, Montana, had a revolutionary idea: that bicycles, a relatively new innovation, could be employed by the military to replace cavalry horses for certain operations. Bikes did not need food, water, or rest; they would not die; they would never disobey their rider; and they were nearly noiseless. The eager young lieutenant set out to test this idea and prove the worth of the bicycle in army campaigns. Stationed at Fort Missoula at the time was the 25th Infantry, and all-black regiment. From these African American troops, Lt. Moss chose an elite group to form the Bicycle Corps and attempt a historic 2,000-mile journey to St. Louis. In the The Great Bicycle Experiment, Kay Moore chronicles this challenging journey, highlighting the hardships and triumphs of these stalwart soldiers as they pedaled and pushed their way across the mountains and plains into history. Perfect for school or home, The Great Bicycle Experiment is both a valuable historical resource and an entertaining adventure story for readers young and old.