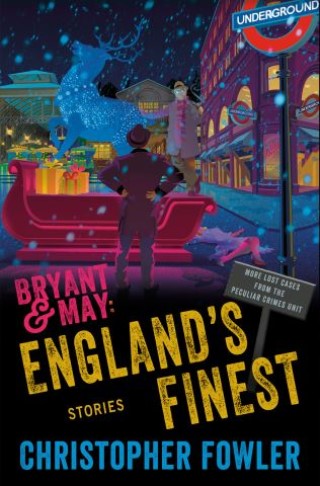 The Peculiar Crimes Unit has solved many extraordinary cases over the years. Some have been forgotten, others hidden, a few lost down the back of the Unit sofa—until now. . . .

Arthur Bryant remembers these lost cases as if they were yesterday. Unfortunately, he doesn’t remember yesterday, so newly revealed facts come as something of a surprise—to everyone, really, not least an increasingly exasperated John May.

Here you will discover the truth about the diva and the seventh reindeer, learn how a consul’s son came to be buried in the Unit’s basement, and understand why a corpse might end up in a swamp of Chinese dinners. There’s an ordinary London street corner that’s prone to strange accidents, and the Post Office Tower plays host to some ghoulish Halloween goings-on—but how a forgotten London legend could be responsible for an apparently impossible death is anybody’s guess. Each of the PCU’s oddest characters has a part to play—and the long-suffering Detective Sergeant Janice Longbright reveals a mystery of her very own.

Twelve crimes in all, solved without resorting to modern technology (possibly because nobody knows how to use it). Expect misunderstood clues, mislaid evidence, arguments about Dickens, various churches and pubs, and, of course, the usual disorderly conduct from the investigative officers laughingly called England’s Finest!

Christopher Fowler: Christopher Fowler is the acclaimed author of the award-winning Full Dark House and fifteen other Peculiar Crimes Unit mysteries, as well as the first PCU story collection, London’s Glory. In 2015, Fowler won the coveted Crime Writers’ Association Dagger in the Library Award in recognition for his body of work. He lives in London, where he is at work on his next Peculiar Crimes Unit novel.