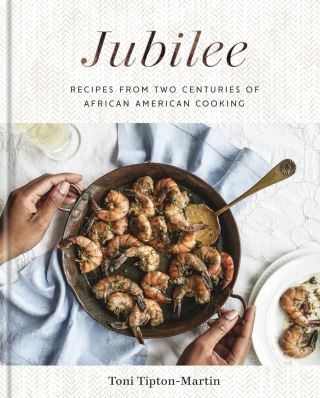 Recipes from Two Centuries of African American Cooking: A Cookbook

“A celebration of African American cuisine right now, in all of its abundance and variety.”—Tejal Rao, The New York Times

Throughout her career, Toni Tipton-Martin has shed new light on the history, breadth, and depth of African American cuisine. She’s introduced us to black cooks, some long forgotten, who established much of what’s considered to be our national cuisine. After all, if Thomas Jefferson introduced French haute cuisine to this country, who do you think actually cooked it?

In Jubilee, Tipton-Martin brings these masters into our kitchens. Through recipes and stories, we cook along with these pioneering figures, from enslaved chefs  to middle- and upper-class writers and entrepreneurs. With more than 100 recipes, from classics such as Sweet Potato Biscuits, Seafood Gumbo, Buttermilk Fried Chicken, and Pecan Pie with Bourbon to lesser-known but even more decadent dishes like Bourbon & Apple Hot Toddies, Spoon Bread, and Baked Ham Glazed with Champagne, Jubilee presents techniques, ingredients, and dishes that show the roots of African American cooking—deeply beautiful, culturally diverse, fit for celebration.

“There are precious few feelings as nice as one that comes from falling in love with a cookbook. . . . New techniques, new flavors, new narratives—everything so thrilling you want to make the recipes over and over again . . . this has been my experience with Toni Tipton-Martin’s Jubilee.”—Sam Sifton, The New York Times

“Despite their deep roots, the recipes—even the oldest ones—feel fresh and modern, a testament to the essentiality of African-American gastronomy to all of American cuisine.”—The New Yorker

“Tipton-Martin has given us the gift of a clear view of the generosity of the black hands that have flavored and shaped American cuisine for over two centuries.”—Taste

Toni Tipton-Martin: Toni Tipton-Martin is a culinary journalist and community activist and the author of the James Beard Award–winning The Jemima Code. Her collection of more than three hundred African American cookbooks has been exhibited at the James Beard House, and she has twice been invited to the White House to participate in First Lady Michelle Obama’s programs to raise a healthier generation of kids. Tipton-Martin is a founding member of the Southern Foodways Alliance and Foodways Texas.