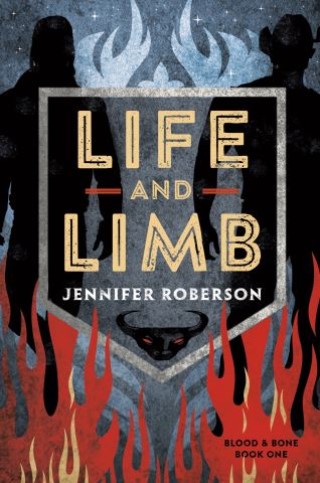 A biker and a cowboy must stop the apocalypse in the first book of the Blood and Bone modern western fantasy series.

His voice was rich, a much loved baritone, as he handed his seven-year-old grandson a gun.

“It’s time we had a talk, you and I. You won’t remember it, but you need to know it, and one day, when it’s time, I’ll call it up in you. You’ll know who you are, and what you’re intended to do. You’ll be a soldier, boy. Sealed to it. Life and limb, blood and bone. Not a soldier like others are, for it’s not the kind of war most people fight on earth. But because we’re not ‘most people,’ you and I, it will be far more important. The fate of the world will hinge upon it.”

Now no longer that wide-eyed child, Gabe is fresh out of prison, a leather-clad biker answering Grandaddy’s peremptory summons to, of all places, a cowboy bar in Northern Arizona. He is about to find out just how different he is from “most people”—and to meet the stranger with whom he will be sealed: life and limb, blood and bone, conscripted to fight an unholy war unlike any other.

For the greatest trick the devil ever pulled was convincing the world he didn’t exist.

And Gabe, thrown into the unlikely company of a country-music-loving rodeo cowboy from West Texas, an ancient Celtic goddess of war, an African Orisha who sings volcanoes awake, a Chinese goddess of mercy, Nephilim, and Grigori, finds himself fighting a battle he was bred for, but wants no part of.

Jennifer Roberson: Jennifer Roberson is the author of the Chronicles of the Cheysuli, the Sword-Dancer Saga, the Karavans series, and the new western fantasy series, Blood & Bone. She has also published three historical novels and several in other genres, as well as a short story collection titled Guinevere's Truth & Other Tales.  She creates mosaic art and jewelry, and lives in Arizona with an assortment of Cardigan Welsh Corgis and cats.