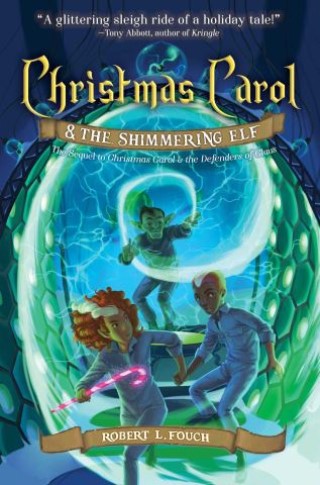 The battle for Christmas, and the world itself, is about to begin.

When Christmas Carol, a Defender of Claus, is suddenly yanked into a portal by her Elven grandmother, she doesn’t immediately understand what’s happening.

But all becomes clear when she and the Ancient One emerge on the other side of the portal in what’s supposed to be the North Pole: everything’s changed.

Carol’s father is gone. The Defenders of Claus don’t exist. The Elf kingdom has been destroyed. And Santa’s a broken shell of himself.

The jolly world Carol knew has turned into a terrifying place, where the magic of Christmas has been eliminated and everyone lives in fear of the all-powerful Supreme Leader. Someone has traveled back in time to change history, and Carol’s pretty sure she knows the culprit.

Carol and her grandmother, with the help of two ragged boys who have lost everything in the rebellion against the Supreme Leader, track down the only Elf capable of helping their enemy travel through time. The bitter, shimmering creature reluctantly agrees to send Carol back, and she lands in the mid-1800s, when Santa was just getting started and the very first Defender of Claus was found. She must protect Santa and the original Defender and undo the damage her enemy has done or risk returning to a present day that has never known Christmas.

Robert L. Fouch: Robert L. Fouch is an author and journalist who grew up in the hills of West Virginia and now makes his home on Long Island in New York. He has worked in the newspaper business for longer than he cares to admit, including twenty-two years at Newsday as a copy editor, page designer, and occasional feature writer. He has a bachelor’ s degree in editorial journalism from Marshall University in Huntington, West Virginia, and is married with a teenage son, who is his sounding board and toughest critic. He is a Browns and Cubs fan, which, before the end of the curse in 2016, was about as much misery as a sports fan could stand.