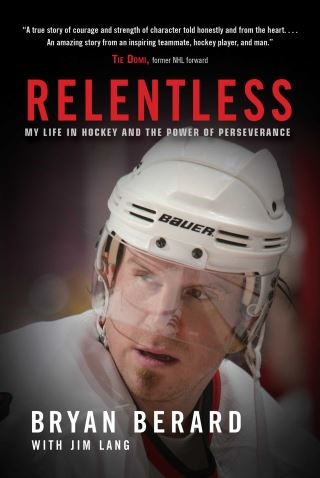 My Life in Hockey and the Power of Perseverance

Former NHL star Bryan Berard shares the inspiring story of his life on and off the ice—from finding early success in the league and suffering a life-changing eye injury to discovering the inner strength to overcome whatever life threw at him and continue to play the game he loved.

My mom turned to me, a stern look on her face. “‘Never’ does not exist in our family’s vocabulary.”

On March 11, 2000, Bryan Berard’s life changed forever. One moment, he was a young hockey star, a former first overall pick and Olympian who had a long, bright career ahead of him. The next, he was writhing on the ice, his eye slashed by a wayward stick.

The doctors feared Bryan might lose his eye. It seemed certain that he would never play hockey again. But ever since his childhood, Bryan had refused to believe that anything was impossible.

With the support of his family behind him and his own inner determination driving him forward, Bryan not only recovered, but made a triumphant return to the NHL just two years after his injury. It seemed that the worst was behind him.

But there were storm clouds on the horizon. Injuries continued to plague him throughout the rest of his career, which saw him move from North America to Russia to continue to play the game he loved. Reports of steroid use cast a shadow over his accomplishments. And then, just as he was about to retire, Berard learned that his long-time financial adviser had defrauded him, several other hockey stars, and others out of millions of dollars in life savings.

Despite every setback, though, Berard refused to give up. He nearly lost an eye, but he never lost sight of what was most important in his life. Funny, honest, and inspiring, Berard’s memoir is a tribute to the resilience and perseverance of the human spirit.

Bryan Berard: Bryan Berard was the number one overall draft pick in the 1995 NHL draft. Berard played eleven seasons in the NHL, winning several awards, including the Calder Memorial Trophy as the rookie of the year and the Bill Masterton Trophy for dedication to hockey. He lives outside Boston, Massachusetts. Visit him on Twitter @BryanBerard.Jim Lang is a Canadian sportscaster, journalist, and the co-author of hockey memoirs by Tie Domi, Max Domi, Wendel Clark, and Brian Berard, as well as Everyday Hockey Heroes with Bob McKenzie. He hosts The Jim Lang Show. He lives outside Toronto with his wife and kids. Follow him on Twitter @JimLangSports.