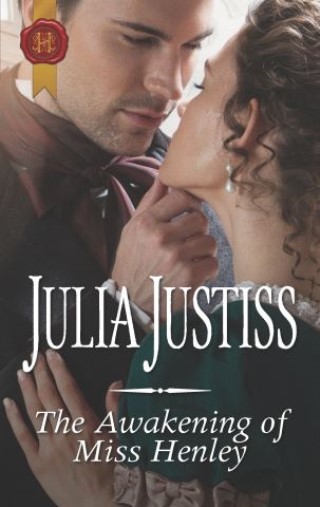 The Awakening of Miss Henley

She was still on the shelf!

Part of The Cinderella Spinsters. Miss Emma Henley knows she’s neither pretty nor rich enough to land a husband. Instead she’s thrown her passion into good causes. But this season she’s tempted by a flirtation with Lord Theo. The dashing rake is just as determined to stay unwed as she is. It’s scandalous…but if she’s never to marry, perhaps he can show her the pleasures of the marriage bed!

"The strongly-written heroine and excellent hero – and their very genuine feelings for one another – buoy The Earl’s Inconvenient Wife to a high recommendation." — All About Romance on The Earl's Inconvenient Wife

"A lovely and tender friends to lovers story." — Goodreads on The Earl's Inconvenient Wife

Julia Justiss: Long before embarking on romantic adventures of her own, Julia Justiss read about them, transporting herself to such favourite venues as ancient Egypt, World War II submarine patrols, the Old South and, of course, Regency England. Soon she was keeping notebooks for jotting down story ideas. When not writing or traveling, she enjoys watching movies, reading and puttering about in the garden trying to kill off more weeds than flowers.