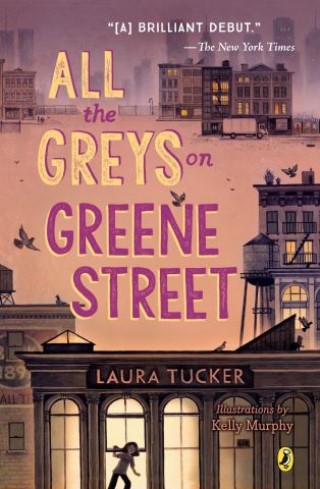 All the Greys on Greene Street

"A dazzling debut novel about resilience, courage, home and family."--Rebecca Stead, Newbery Award-winning author of When You Reach Me

SoHo, 1981. Twelve-year-old Olympia is an artist--and in her neighborhood, that's normal. Her dad and his business partner Apollo bring antique paintings back to life, while her mother makes intricate sculptures in a corner of their loft, leaving Ollie to roam the streets of New York with her best friends Richard and Alex, drawing everything that catches her eye.

Then everything falls apart. Ollie's dad disappears in the middle of the night, leaving her only a cryptic note and instructions to destroy it. Her mom has gone to bed, and she's not getting up. Apollo is hiding something, Alex is acting strange, and Richard has questions about the mysterious stranger he saw outside. And someone keeps calling, looking for a missing piece of art. . . .

Olympia knows her dad is the key--but first, she has to find him, and time is running out.

Lauded by critics in five starred reviews, All the Greys on Greene Street has been called "a remarkable debut" and "a triumph."

Laura Tucker: Laura Tucker is a writer and former literary agent who has coauthored books on a wide range of topics, including health, fitness, parenting, and self-help. Her credits include Still Room for Hope by Alisa Kaplan, Standing Tall by C. Vivian Stringer, Shalom in the Home by Rabbi Shmuley Boteach, and Training for Life by Debbie Rocker. She lives in Brooklyn, New York.