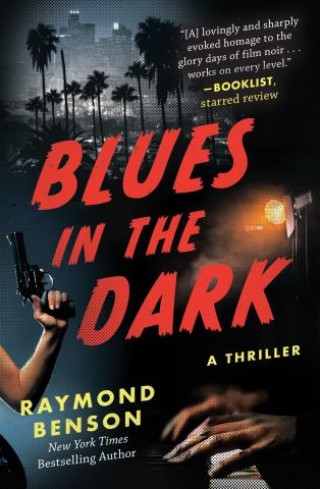 Blues in the Dark

From the New York Times bestselling and internationally acclaimed author comes a Hollywood crime drama set in the 1940s and present day that tackles racism, sexism, and murder.

Karissa Glover is a movie producer who moves into a decrepit but functional old mansion in the West Adams Heights area of Los Angeles, where black celebrities of yesteryear—Hattie McDaniel, Louise Beavers, and others—once resided. The former owner was a white actress, Blair Kendrick, who often starred as the "bad girl"—a femme fatale—in films noirof the 1940s. However, Blair’s career was cut short when she was tragically killed by the mob after allegedly witnessing the slaying of a corrupt studio head in 1949.

As Karissa and her producing partner decide to develop a modern film noir about Blair Kendrick, malevolent forces from the past attempt to stop them—first with intimidation, and then with the thread of murder.

Is this because Karissa has learned that Blair was involved in a then-taboo interracial relationship with jazz musician Hank Marley? What really happened on the night that death struck in a dimly lit studio mogul’s office? The consequences of Blair and Hank’s doomed love affair still resonate in the present day as Karissa attempts to unravel Blair’s secrets.

Seeping with mystery, intrigue, Hollywood history, and forbidden romance, Blues in the Dark is Raymond Benson at his most insightful and page-turning best.

Raymond Benson: Raymond Benson is most well-known for being the third—and first American—author to be commissioned by the James Bond literary estate to write the 007 novels between 1996–2002. He is the author of thirty-six books, including the New York Times bestselling The Black Stiletto series, now in development as a feature film, and most recently The Secrets on Chicory Lane. Benson lives in Chicago, Illinois.