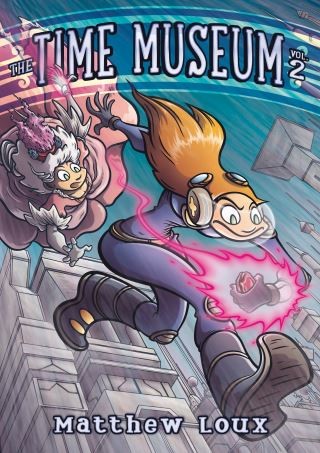 In this second volume of the Time Museum duology by Matthew Loux, Delia and her team of time travelers head to Versailles in 1778.

Delia and her fellow time travelers are ready for their next big mission, and this time they won’t be working alone. With the help of a more seasoned Epoch Squad, led by none other than President Richard Nixon himself, the team heads back in time to save a historical alliance between the United States and France.

The plan goes awry and they find themselves trapped in the wrong reality, where the only ones who can help them are...themselves? Will the team be able to ditch their itchy French formal wear and escape the time loop they’re trapped in? Or will this be their last mission?

Matthew Loux was born in eastern Connecticut and attended the School of Visual Arts in New York City. His previous books include the Salt Water Taffy series, SideScrollers, and F-Stop. He lives in Westchester County, New York.